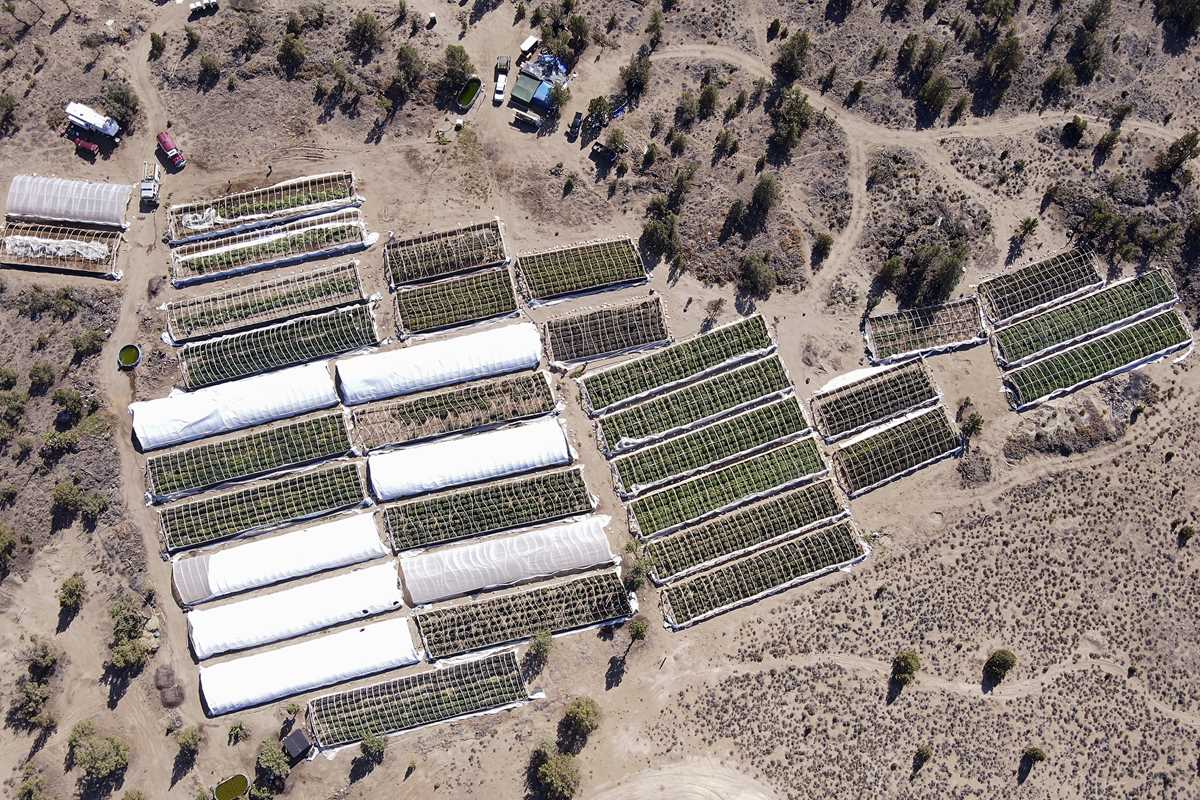 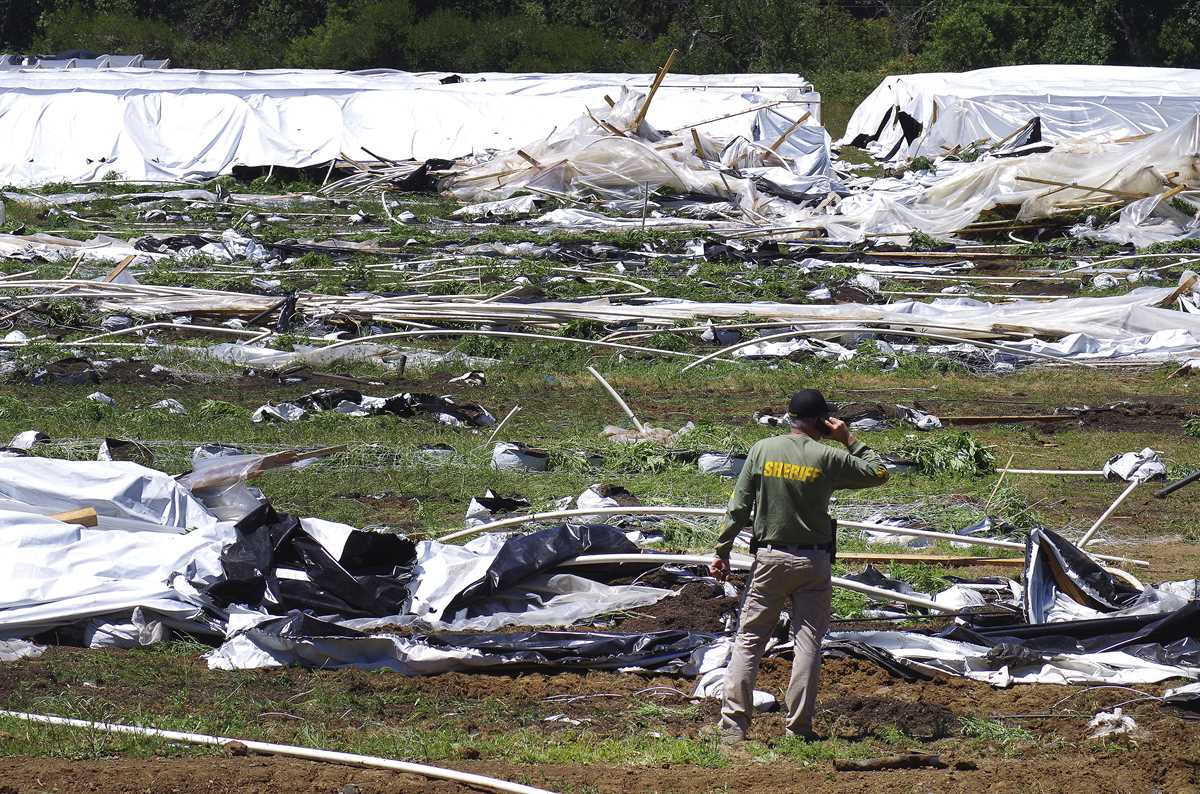 This aerial file photo provided by the Deschutes County Sheriff’s Office shows an illegal marijuana grow in Alfalfa, Ore., on Sept. 2, 2021. In 2014, Oregon voters approved a ballot measure legalizing recreational marijuana after being told it would eliminate problems caused by the “uncontrolled manufacture” of the drug. Illegal production of marijuana has exploded instead. Oregon lawmakers are now looking at toughening laws against the outlaw growers. (Deschutes County Sheriff via AP, File)

SALEM, Ore. (AP) — In 2014, Oregon voters approved a ballot measure legalizing recreational marijuana after being told it would eliminate problems caused by “uncontrolled manufacture” of the drug. Illegal production of marijuana has instead exploded.

Oregon lawmakers, who have heard complaints from police, legal growers and others, are now looking at toughening laws against the outlaw growers. Oregon, one of the first states to legalize recreational marijuana, can be an object lesson for other states, including Maryland and Missouri, where voters legalized weed on Nov. 8. That raised the number of states that have approved marijuana’s recreational use to 21.

So far this year, police have seized over 105 tons (95 metric tons) of illegally grown marijuana in Oregon, according to the Oregon-Idaho High Intensity Drug Trafficking Area task force. That’s up from at least 9 tons (8 metric tons) in 2019.

The indoor and outdoor grows use massive amounts of water in drought-stricken areas, contaminate the environment and employ migrant laborers who live in squalid conditions.

A draft bill for Oregon’s 2023 legislative session that begins Jan. 17 would double the maximum prison sentence and fine — to 10 years in prison and $250,000 — for unlawful manufacture involving more than 100 plants and possession in excess of 32 times the legal limits. Personal possession limits in Oregon are 2 ounces (57 grams) of marijuana in a public place and 8 ounces (227 grams) in a home.

The measure also holds people accountable for environmental damage and prohibits use of water at locations not licensed for growing marijuana. Addressing immigrant labor, the draft bill makes it a crime for managers of an illegal grow site to confiscate a passport or immigration document, to threaten to report a person to a government agency for arrest or deportation, or withhold wages without lawful justification.

Some parts of Oregon have seen record seizures as police raid plantation after plantation. Police say foreign criminal gangs have become involved, from Mexico, Russia, China and other countries.

A single raid in October yielded 76,930 pounds (35,000 kilograms) of marijuana in Yamhill County, southwest of Portland, the largest pot bust on record in a county more renowned for its pinot noir wine.

“Investigators found the entire property had been converted to facilitate the growth, storage, processing, and packaging of marijuana to be shipped or transported out of the area,” the sheriff’s office said.

The street retail value of the marijuana in Oregon would be $76 million while on the East Coast it would be worth $269 million, the sheriff’s office said.

Receipts at the property in rural Newberg, Oregon, showed wire transfers involving large amounts of money going from Oregon to the state of Michoacán in Mexico.

On Oct. 25, Oregon State Police, including SWAT officers, raided a property in southern Oregon’s Jackson County that had pot growing in greenhouses. They officers destroyed about 1,000 pounds (450 kilos) of illegal, processed marijuana and found the carcass of a black bear, along with firearms and three stolen vehicles.

The amount of illegal marijuana that law enforcement officers manage to intercept each year in Oregon is believed to be dwarfed by the uncounted tons that are smuggled out of state and sold for high profits.

The 2014 Oregon voters’ pamphlet said legalization of recreational marijuana would “eliminate the problems caused by the prohibition and uncontrolled manufacture, delivery, and possession of marijuana within this state.”

Anthony Johnson, who was the chief petitioner for Ballot Measure 91, acknowledged that legalization — and the creation of a regulated industry from farm to customer — has not stemmed the illegal grows.

With recreational marijuana still being illegal federally as well as in many other states, Johnson said the problem won’t go away because of the high profit margin from selling on the black market in those states.

“I think that this is going to remain a problem until the federal government legalizes across the nation,” Johnson said in an interview on Tuesday.

He said, though, that authorities should act against the illegal growers in Oregon.

“Certainly, when unregulated grows are stealing water or using chemicals that shouldn’t be polluting our land, then it’s expected that the state and/or federal government is going to move in to enforce state law.”