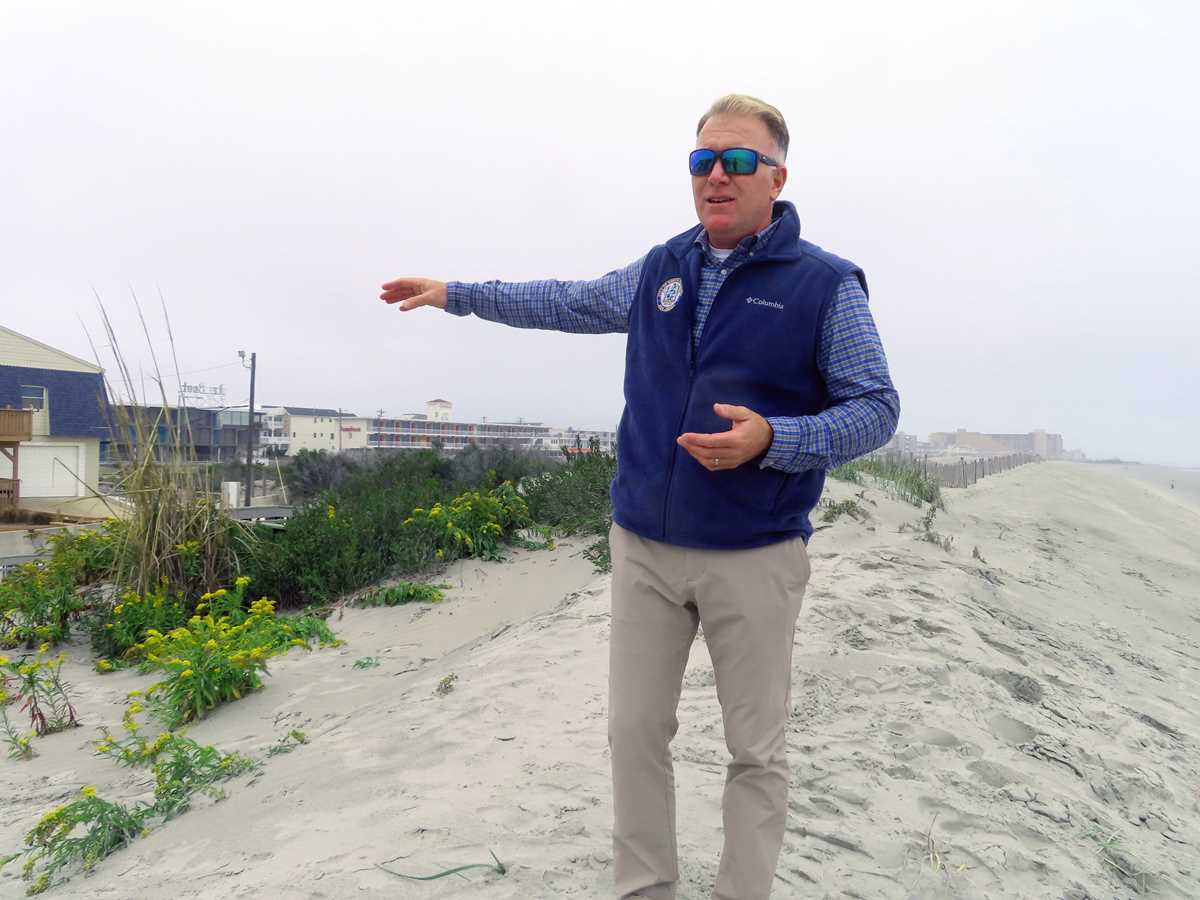 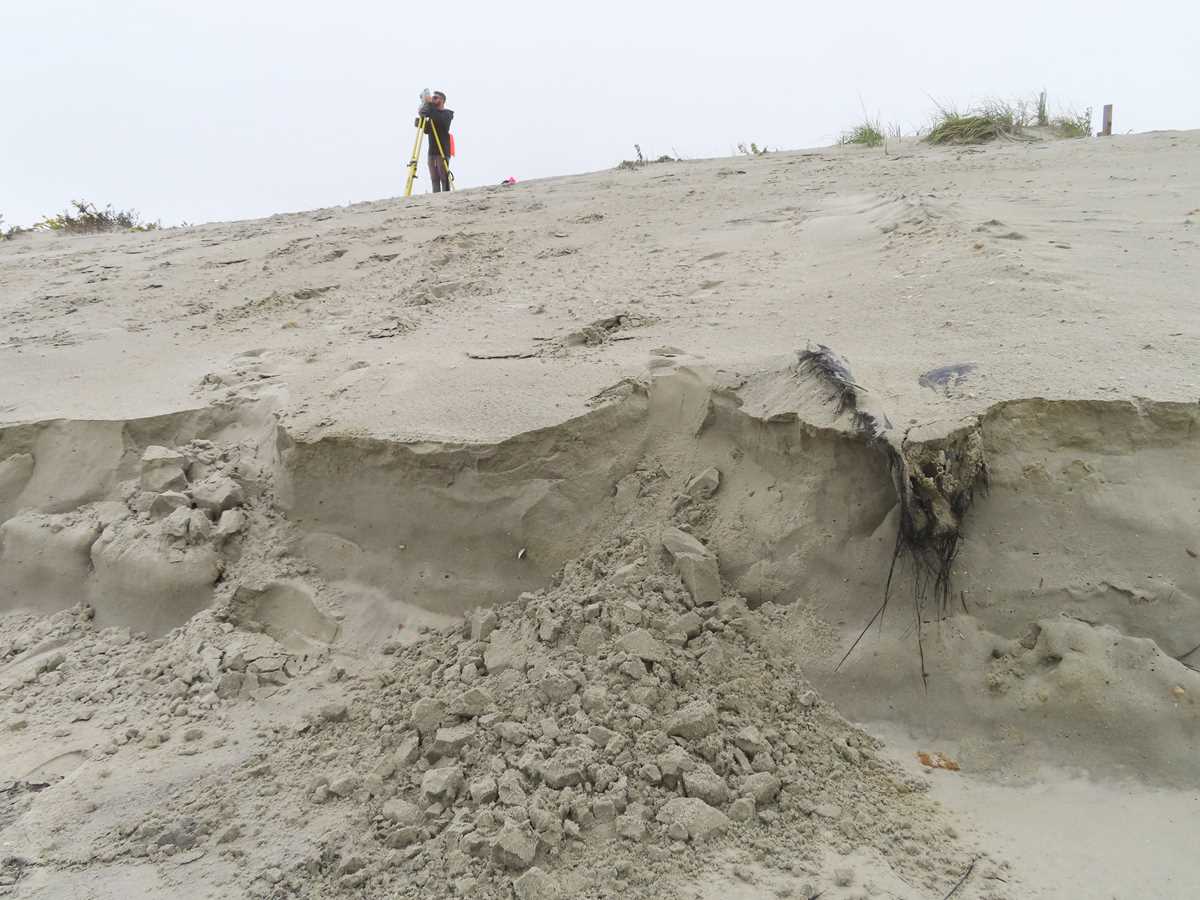 A worker from Stockton University surveys the contours of a newly reconstructed sand dune in North Wildwood, N.J., on Oct. 25, 2022. New Jersey filed a lawsuit Tuesday, Dec. 6, 2022 suing one of its shore towns that repaired damage from an October storm in defiance of a state order not to do so. (AP Photo/Wayne Parry, File)

NORTH WILDWOOD, N.J. (AP) — A sand storm at the Jersey shore is escalating.

New Jersey is suing a coastal town that repaired beach erosion from a fall storm in defiance of a state order not to do so.

And the town, North Wildwood, remains defiant: It says it will place material to build a prohibited bulkhead on the sand next week and promises it will build the wall if a storm predicted for this weekend causes the temporarily repaired dune to collapse.

The state says there is no imminent danger to communities near the beach and warns that the work the city wants to do could actually make future beach erosion worse.

A Superior Court judge on Thursday set a Jan. 17 court date to hear the dispute between the state Department of Environmental Protection and North Wildwood.

But the judge declined to issue an injunction immediately barring the town from installing the bulkhead or carrying out other emergency repairs.

The dispute involves damage to some North Wildwood beaches when the remnants of Hurricane Ian passed by in October, chewing huge chunks out of protective sand dunes.

North Wildwood asked New Jersey environmental officials for permission to do an emergency reconstruction of the sand piles.

The state said no. The city did it anyway.

Since then, conditions have only gotten worse in the area, Mayor Patrick Rosenello told The Associated Press.

“Practically every high tide has damaged that dune,” the mayor said Thursday. “We are expecting a nor’easter this weekend which, depending on the severity, could cause that dune to collapse.

“We will have bulkhead material on site by next week,” he said. “If the dune collapses, we will install the bulkhead.”

In court filings, the state said North Wildwood should not be permitted to get away with brazenly disregarding state laws. It also denied that the dune has worsened since October.

“The City of North Wildwood must not be allowed to act in defiance of Department of Environmental Protection by beach construction work that will cause significant harm to the environment,” the state wrote.

“Restraining North Wildwood from installing the bulkhead is necessary to prevent permanent and irreparable harm to the environment, including the vegetated dunes, exceptional freshwater wetlands, freshwater wetlands transition area, and a critical wildlife habitat with threatened or endangered species at this location,” it added.

Disputes between states and cities are not uncommon, and fines are not unheard of — something that could happen in this case. But they are rare when it comes to the topic of beach protection, with states and local communities usually willing partners.

The DEP on Oct. 7 allowed the city only to place concrete “Jersey barriers” as a temporary protective measure and expressly forbade it from touching the dunes without a detailed review and approval of proper plans and permits.

North Wildwood disagreed and sent bulldozers onto the beach to push huge piles of sand back where they had been.

The mayor said there was a sheer 15-foot drop-off from the top of the eroded dune to the beach below, creating an imminent hazard to the public.

While most of the Jersey Shore’s 127-mile coastline got replenished beaches in the years after Superstorm Sandy hit in 2012, North Wildwood has not, Rosenello said. The city is part of a proposed multi-town beach project also involving Wildwood, Wildwood Crest and Lower Township.

But numerous legal and real estate agreements must be executed before that can happen, and it will be at least fall 2024 before that project can begin, the state estimated in August.

In the meantime, North Wildwood spends millions of dollars each year to truck tons of sand from neighboring Wildwood, home to some of New Jersey’s widest beaches. The most recent bill was $3.8 million, and the city has spent in excess of $20 million on imported sand over the past decade, the mayor said.

The state also noted that North Wildwood continues to flout a 2020 order to restore 12 acres of mature, vegetated dunes that were removed for a different unauthorized seawall project.

Before you consider Citigroup, you’ll want to hear this.

MarketBeat keeps track of Wall Street’s top-rated and best performing research analysts and the stocks they recommend to their clients on a daily basis. MarketBeat has identified the five stocks that top analysts are quietly whispering to their clients to buy now before the broader market catches on… and Citigroup wasn’t on the list.

While Citigroup currently has a “Hold” rating among analysts, top-rated analysts believe these five stocks are better buys. 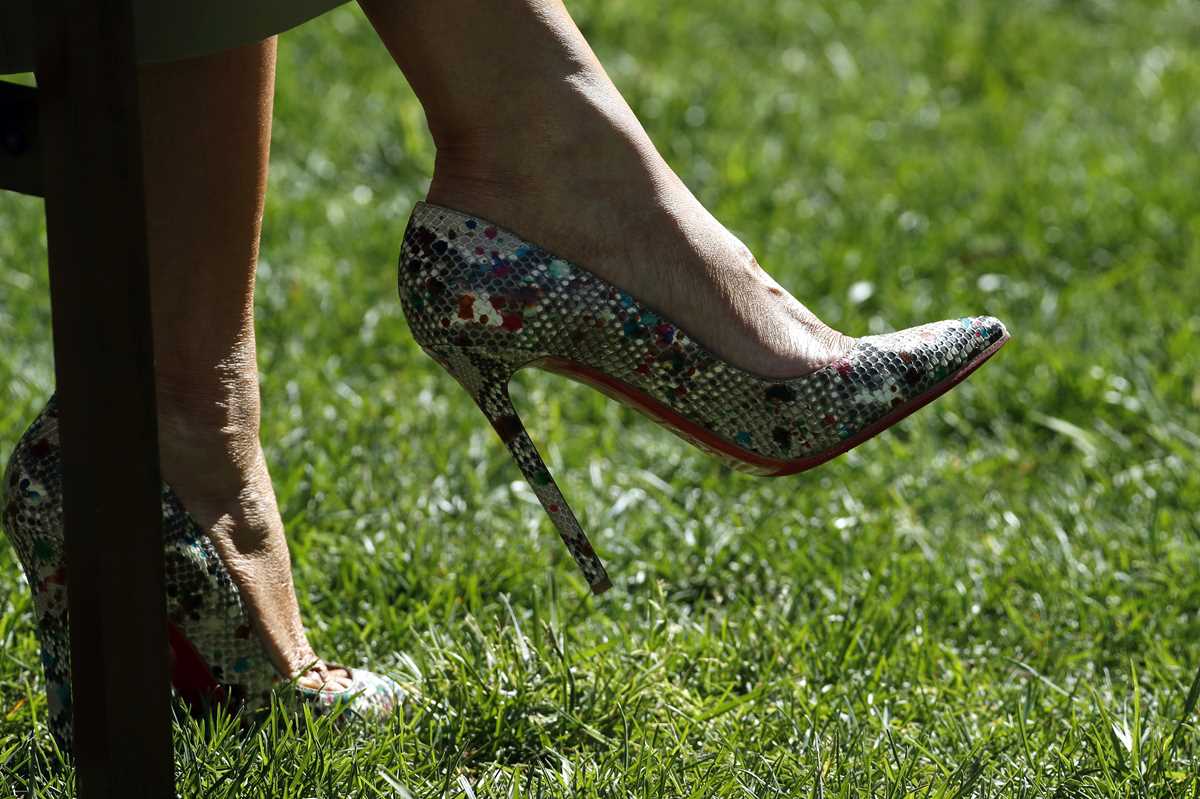 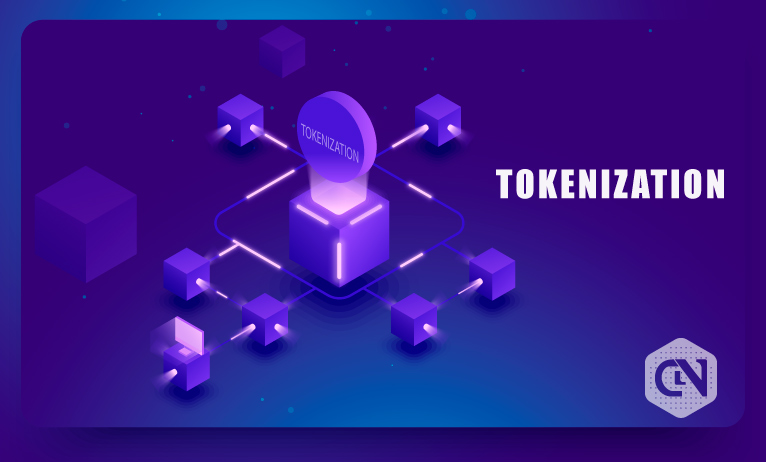